MANY MEN OF MUSCLE.

Only an Actual Test Will Determine the Strongest.

Fremont Wallace of Milton, N.H., Would Probably Hold His Own.

Isador Storm and Chief of Police Rines Also Among the Town’s Samsons.

MILTON, N.H., Nov 2. – There are many men of muscle in Milton, and only an actual test will determine which is entitled to the distinction of being termed the strongest.

Some of the villagers are willing to wager wealth on one, while their neighbors are equally confident regarding the abilities of others.

Fremont Wallace is undoubtedly one of the strongest, if not the most powerful, of the entire number. He was 42 years old on Wednesday, Nov 14, was born in the neighboring village of Middleton, but has been a resident of Milton nearly all his life. He is married and has four children. His height is 5 feet 9 inches and his weight 178 pounds. Of late he has been employed as a shoemaker, and in the leather board factory on the outskirts of the village. Previous to this he was accustomed to heavy work, such as falls to the lot of the truckman. That was the vocation followed by his father, who was noted for his great strength among the men of’ Middleton.

One day a number of men employed in a local factory were testing their lifting capacity on the section of a broken iron water wheel, weighing 442 pounds. Struggle as they might, not one among them could make the object budge, although they tugged at it with both hands and with might and main.

Fremont Wallace had been an interested spectator, and when all their efforts had failed he grasped the weight firmly with one hand and lifted it fairly from the ground. From that day to this his lifting abilities have never been questioned. Mr. Wallace himself states that there is one man in Milton who is stronger in some ways than he, but asserts that, while Isadore Storm can with one hand raise a dumbbell weighing 135 pounds above his head repeatedly and with apparent ease, a thing that he (Wallace) has never been able to accomplish, he is positive that he can lift a greater dead weight from the ground than can Storm. 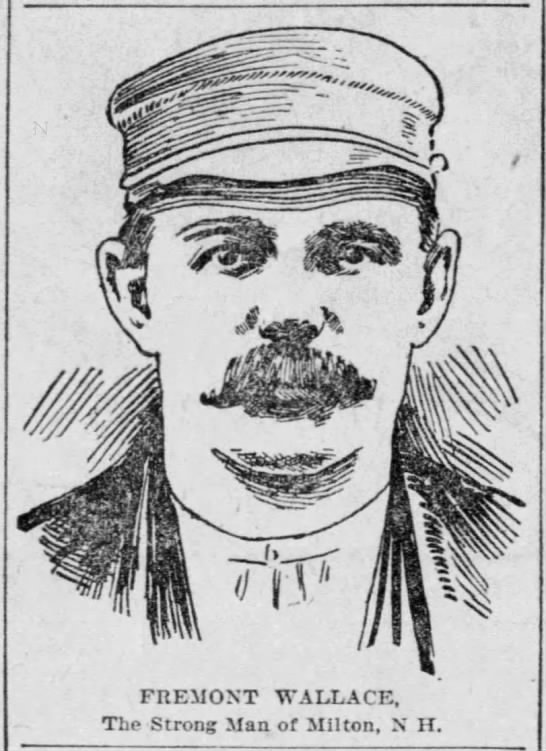 Isadore Storm is an iceman, and will toss a 300-pound cake of ice into a refrigerator as easily as the ordinary man handles a feather pillow.

He is 31, stands 5 feet 9 inches and weighs 200 pounds. For a number of years this modern Hercules traveled about the country with an Indian medicine company, performing feats of strength. Four years ago this company gave an exhibition in the adjoining village of Sanbornville, and there Storm was smitten with the charms of a Sanbornville maiden, whom he married. The couple located in this village, and here they have since made their home.

It is Storm’s custom, after his day’s work is completed, to play with the dumbbells for an hour or more every evening, and he is constantly performing some new feat to the astonishment of his neighbors.

Another of the Milton Samsons is Chief of Police Harris Rines. Mr. Rines is very popular, and many of his friends assert that he is actually the strongest man in town. Chief Rines is 40, measures 5 feet 11 inches in height and tips the scales at 210 pounds. His commands are always promptly obeyed, for it is well known that the genial chief is not at all backward about enforcing them whenever occasion demands.

One of the most jovial and thoroughly good-natured specimens of robust manhood in Milton Is Dan Lockhart. He is always ready to cope with any emergency, and up to the present has always come off with flying colors.

He is 28, stands 6 feet in his socks and weighs 185 pounds. It is told of Lockhart that while driving a yoke of oxen one day not long ago, the big sleek fellows became frightened and attempted to run away. A yoke of oxen can travel pretty fast when badly scared, and away they went, the big wagon, loaded with prize pumpkins, jolting from one side of the road to the other, the whole outfit in Imminent danger of upsetting and rolling down the hillside. Lockhart dashed after them, and, overtaking the cattle, grasped the nigh ox by the horns and actually threw the animal to the ground. Then he assisted the beast to regain his feet and continued the journey as though a struggle with a big fat ox was an everyday occurrence. He has been known to handle a vicious bull in the same manner.

A neighbor of Lockhart’s was having some trouble with a hayrack, the heavy wheels of which had got into a position through the stable floor from which it appeared impossible to extricate them. Lockhart happened along, and stooping, placed his shoulders under the hay-rigging. In another moment he had solved the problem by lifting rigging, wheels and all, out of the hole, and with a motion of his body, threw them to one side. The total weight that rested upon his shoulders during the operation is estimated at 1500 pounds.

Lockhart handles barrels of oil weighing from 450 to 500 pounds with ease. He will pick up an ordinary kitchen range and carry it unassisted from a delivery wagon into a house, placing it anywhere that the good housewife may designate. Once when a number of men were endeavoring to decide how best an invalid of rotund figure, weighing close to 200 pounds, whose condition was such that he could be moved only in an invalid chair on wheels could be got within the door of his domicile, he having just returned from a journey during which he had been taken violently ill, Lockhart listened to the various theories for a moment, and then picked up both chair and invalid and quietly walked into the house with them while his neighbors looked on in open-mouthed wonder.