As for the presentations, they were … interesting.

Candidates for Selectman – Five for One Three-Year Position

Former selectmen Beaulieu and Rawson did not appear at the Meet the Candidates Night event.

Mr. Dennis Woods, a write-in candidate for the one-year slot on the Budget Committee, asked this question on the Milton, NH Community News Facebook page:

Why would we re-elect [former] Selectmen that are, at least in part, responsible for current conditions?

That is a good question, Mr. Woods. These are the very men, along with current Chairman Thibeault, that created the 2017-18 valuation fiasco. (Mr. Beaulieu’s responsibility, if any, is not as clear as Mr. Rawson’s).

Now, it might be, just possibly, that they have seen the error of their ways since and wish to repair, to the extent possible, all of the damage that they have done?

Mr. James M. “Mike” Beaulieu has not explained his absence from the Meet the Candidates Night event, nor has he issued any statement as a substitute. It is rumored that he might favor cutting taxes, but that is perhaps an uncertain foundation on which to build the necessary reforms.

He is said to be available by phone to answer any questions. (I will not give the number here because … the internet). At any rate, Mr. Beaulieu’s “retail” campaign strategy does not suggest someone running seriously to win. (He is engaged also in an uncontested race for a seat on the ZBA). 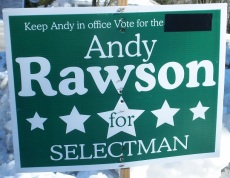 Mr. Andrew “Andy” Rawson explained in a statement that he was away on a vacation that he had planned for two years. Okay. The remainder of his statement does not suggest that he has learned anything at all since he was turned out of office last year (by current Vice-Chairwoman Erin Hutchings with a very narrow margin).

Mr. Rawson arranged for a statement to be handed out, which the moderator read into the record. It did not address any tax reduction, as such, except to provide the usual formulation about being “careful” when spending tax money. Translation: he would not be cutting taxes. Former Selectman Long, who completed Mr. Beaulieu’s last term, used his question time to instead make an endorsement of Mr. Rawson.

Messrs. Brown, Sturtevant, and Walden all appeared at the Meet the Candidates Night event.

No one in the audience asked The Question, as such, although they were restive. Mr. Bailey asked something similar of his own.

Glen Bailey: I was just wondering … a couple of people behind me asked, “was there a limit to all this … this taxation?” I was a little disappointed … this is the School Board, obviously … I was a little disappointed that they didn’t seem to think there was. Or they were confused, one or the other. So, the same question for you – which of you, or maybe all of you, is going to cut my taxes? Not cut the rate of increase, not everything else on the planet. Who is going to cut the bottom line of my taxes?

Moderator Jacobs put in his oar to argue for the status quo of increasing taxes. (You will want remember to thank him at his next election). He asked Mr. Bailey the “muh services” question.

Jacobs: Can I ask a counter question? I one time thought we could just shut down the transfer station and send everybody to Rochester – when I was a selectman – close out the fire department and just go to Rochester; close the ambulance service and ask Rochester, Frisbee, to come up here; and contract out with somebody to plow the roads.

Jacobs: It meant a huge level of service decrease. Is that acceptable?

Bailey: It’s not acceptable to keep raising the taxes to the point that you’re driving people out of town.

Bailey: It’s not acceptable, so something has to go. So, which of you will cut my taxes?

Thank you, Mr. Bailey, for helping us cut the … get to the point.

Messrs. Brown, Sturtevant, and Walden were present and answered questions. Our interest here is in whether the candidate would work to reduce taxes.

Mr. Adam G. Sturtevant went first. He spoke of efficiencies of scale, return on investment (as well as its acronym ROI), brick and mortar, “muh services,” etc. When prodded, he offered this final answer:

… I’d be lying if I said I’d be cutting your taxes without seeing the full budget and knowing what you’d be getting. So, the answer is I would cut it if it was possible, but I don’t know that answer.

Mr. Laurence D. “Larry” Brown went third. He used his time, but did not need to be prodded for his conclusion. His final answer: 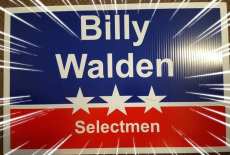 [Regarding Milton Town taxation as an “existential threat”:]. Yes, it is. You hear a lot of people say that. Older folks. I don’t want to be eating cat food. But the way the Town is going right now, with the tax increases and things like that, that’s where it’s headed. I am going to do whatever I can, within my capacity, to lower taxes. I mean, that’s the goal. It really is a sinking ship when you look at the amount of people that are trying to possibly move out of Town or find a better place with a lower tax rate. What I really want to do is try to grab a bucket and bail some of the water out of the ship. That’s really my goal. And whatever I need to do to make that happen, that’s what I’m going to do. Within my capacity, because I’m one of three.

The Answer to The Question

Of all the five candidates only Mr. BILLY WALDEN committed himself to work, vote and act to reduce Milton’s oppressive taxation.

He purports to be not another George. It might be that we will get to see.

I thought he'd be taller. View all posts by S.D. Plissken