This was also the year in which we heard the tale of Mother Barker, although her Milton residence had been considerably earlier.

The year began, as it often did, with a description of ice quality, ice cutting, the ice market, and even current ice wages. 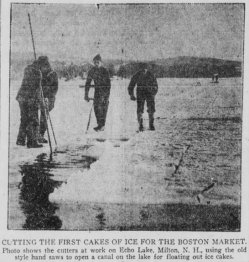 FIRST ICE TAKEN FROM ECHO LAKE. Harvesting Will Continue Five or Six Weeks — Supply Late But Plentiful. MILTON, N.H., Jan. 12. – The first ice cut this winter for the Boston market was taken out of Echo Lake yesterday where the ice is twelve and a half inches thick. Although this is nothing more than the usual thickness, the ice has been declared by experts to be of good quality and a plentiful though late supply is predicted. HARVEST AT HEIGHT. Echo Lake, which is 80 miles from the State House at Boston, is one of the largest contributors to the ice market at Boston, Lynn and Salem. During the next five or six weeks, when the ice harvest will be at its height, the lake is expected to furnish 100,000 tons for the summer supply of those cities. Although this is only a small part of the total supply, it will require the labor of 500 men and horses to harvest it. This year the quality of the ice will more than offset the lateness of the harvest, according to John Alexander Burbine, foreman for the Boston Ice Company, who has been cutting ice on the lake for the past 35 years. “It’s all solid water,” said he with a smile on his weather beaten face as he examined the first cutting today. “The crust of frozen snow is only an inch and a half thick, so that the cakes will be excellent. With good weather we ought to be able to fill the four houses on the lake during the next four weeks.” Every train is bringing seasoned ice handlers into Milton, scrapers, sawyers, groovers, floaters, chainmen, splitters and housemen. Some are old employees of the ice companies sent up from Boston, but the majority hail from neighboring cities and towns. The ice companies are able to employ only a very small portion of those who apply for work, so that hundreds have been turned away. Last year the wages paid were $4 to $4.50 for a 10-hour day. This year the schedule, it is said, will be $3 to $3.50 a day (Boston Post, January 13, 1921).

The Boston Ice Company foreman, John Alexander Burbine, registered for the WW I military draft in Reading, MA, June 5, 1917. He was an ice man, employed in Reading by E.E. Nichols. He was twenty-four years of age, having been born in Wakefield, MA, July 11, 1892. He resided at 13 John Street in Reading with his wife and two children. He was a tall man, with a medium build, blue eyes, and dark brown hair.

Burbine’s employer of 1917 ran the Reading Citizens’ Ice company, which suffered a suspected arson fire just a few years before.

ICE HOUSES BURNED. Three Small Boys Were Seen Running Away Shortly Previous to $9000 Fire in Wakefield. WAKEFIELD, May 7 – Firemen of this city and adjacent places were kept busy today by forest fires, and early this evening the ice houses of the Reading Citizens Ice company at the bead of lake Quannapowitt were destroyed with 2500 tons of ice, all the property of Edward E. Nichols of Reading. The establishment consisted of three connected wooden buildings measuring collectively about 100 feet ln length and valued at $2000. The ice that was melted was valued at $7000. The property was partly insured. As three small boys were seen running away from the ice houses shortly before the fire was discovered, it is thought they may have been responsible for it. The police have been unable to learn their identity, however. A fire in the woods at the intersection of the boundary lines of Wakefield, Stoneham and Melrose kept firemen from all three of those cities busy for four hours during the afternoon. Five acres of woodland were burned over. Five acres in Melrose woods were extinguished during the day (Boston Globe, May 8, 1911).

John A. Burbine, a laborer, and his wife, Lavinice C. Burbine, appeared in the Reading directory of 1921, with their home at 8 Pleasant street.

Here we bid farewell to Mrs. Susan F. (Randall) Merrill of Milton Mills, who died in her sister’s Brockton, MA, home in February.

She and her husband, Asa Merrill, appeared previously in a 1919 article about them spending their winters in Brockton with her sister.

Malcolm A.H. Hart, physician, home 30 So. Main street, appeared in the Milton directory of 1917. Marion W. Hart, machinist, had his home there too. This address would have been close to So. Main [or Lower Main street] street’s intersection with Church street [now Steeple], which intersected at 32 So. Main street.

Malcolm A.H. Hart, a physician, aged fifty-eight years (B. NH), headed a Milton household at the time of the Fourteenth (1920) Federal Census. His household included his wife, Estell L. Hart, aged fifty-six years (b. VT), his son, Ezra G. Hart, aged twenty-three years (b. NH), and his boarder, Clara M. Roberts, a widow, aged eight years (b. NH). He owned his house on Lower Main Street, in Milton Village, free-and-clear. They appeared in the census enumeration between the households of Natt E. Young, a draftsman, aged forty=three years (b. ME), and Fred C. Downs, an ice company laborer, aged forty-two years (b. NH).

MILTON, N.H. HOME AND BARN BURNED. Special Dispatch to the Globe. MILTON, N.H., March 22. –  At 4:30 this morning fire was discovered in the barn of Dr. Malcolm H. Hart by members of the family, and the two-story residence and barn were destroyed with the contents, including a valuable automobile. At one time five other buildings were afire, but suffered but little damage. The loss to the Hart property will amount to $7000, partly covered by insurance. The cause of the fire is supposed to be a defective wire (Boston Globe, March 22, 1921).

INTERESTING SMALL ITEMS OF THE WEEK IN TOWN. Miss Sarah Draper had a letter the first of the week from her sister, Mrs. Malcom Hart of Milton, N.H., informing her that their home and contents were destroyed by fire and that members of the family narrowly escaped with their lives. Dr. Hart lost all his equipment and supplies (Fair Haven Era, March 24, 1921).

Rev. Harvey E. Whitcomb accepted a call from the Milton Mills Baptist Church, as his first parish after his later-in-life ordination.

Harvey E. Whitcomb, an Ord. Dept. auditor, aged fifty-four years (b. Canada (Eng.) “Am. Citizen”), headed a Laurel, MD, household at the time of the Fourteenth (1920) Federal Census. His household included his wife, Alice E. [(Eaton)] Whitcomb, aged fifty years (b. VT), and his daughter, Lucy E. Whitcomb, a For. Services Field Secretary, aged twenty-six years (b. MA). They resided in a rented unit of a two-family dwelling on Washington Ave. Both of Harvey E. Whitcomb’s parents were born in Vermont, i.e., they were citizens. Although Whitcomb himself was born in Canada, he was an American citizen by virtue of having citizen parents.

JEFFERSONVILLE. Harvey E. Whitcomb, a former resident, was ordained at the First Baptist Church at Somerville. Mass., Sunday evening, May 15, and has accepted a call to preach at the Baptist Church at Milton Mills, N.H., and began his pastorate there April 1 (Burlington Free Press, May 21, 1921).

Our Own Folks. A Rare Ordination. It was that of Deacon Harvey E. Whitcomb of the First Church, Somerville. Think of a downright good man quite sixty [fifty-five] years old, who with the heartiest godspeed of his church and his brethren without, leaving a lucrative occupation to give the remaining years of his strength to the Christian ministry! He is equipped by training both as a doctor and an architect, and best of all by years of Christian experience and teaching. The council was refreshed by his unconventional Biblical intelligence,, his sincerity, and his ripe spiritual preparation to lead a Christian church. The public service of ordination was hearty and impressive. Drs. C.H. Watson, F.F. Peterson, W.A. Kinzie, and Pastor Chellis W. Smith officiated. The candidate continues a pastorate already begun, at Milton Mills, N.H., one of the strong rural churches in the Granite State (The Baptist, June 4, 1921).

Here we encounter another tale of Boston city slickers or, as they were also known, “sharpers,” robbing a Milton Mills man.

LIBBEYS VISIT TO BOSTON COST $150. A ‘Guide’ and an ‘Actress’ Proved His Undoing. William Libbey, 56, of Milton Mills, N.H., made his first trip down to Boston a couple of days ago and he has told the police that it will be his last visit to Boston, unless he returns with a sheriff.

Libbey would like to find a “guide” and an “actress,” for between them, he says they got $150 from him.

Libbey says he never would have been in Boston if it was not for the fact that Boston Summer visitors to New Hampshire told him what a great place Boston was and how all the sights, the Boston Common, the ocean, Public Garden, the Elevated structure, Tunnel and subways could be seen for the paltry sum of $1. When Libbey arrived at the North Station the day before yesterday he fell in with a sharper, who took him around to see the wonderful sights.

“I’m Alderman-at-Large and chief guide,” the stranger told Libbey, and to back up his claim produced some sort of a badge. Libbey didn’t know what it said on the badge. Libbey, however, was glad to meet the “Alderman,” who incidentally found out considerable about Milton Mills, N.H.

“I heard the word ‘sharper’ often in New Hampshire, but never knew what it meant,” said Libbey to his new found friend. The latter explained what sharpers were, but added they were now cleaned out, that the policemen knew them and they decided to quit the city.

Libbey understood sharpers were always hanging around the depots, and the “Alderman” admitted it was true, that they met the trains from Maine, New Hampshire and Vermont.

The “Alderman” took Libbey to the South End, showing him all the sights, including the Subway and the Elevated structure, and Boston Common. The thing that caught Libbey’s fancy the most seemed to be the Elevated trains as they passed Blackstone and Franklin-sq Parks.

Along about 9 o’clock Wednesday night Libbey and his guide were in the vicinity of Arlington sq. when a young woman came along who was introduced as Miss Bertha Smith, an actress, playing at the Fayette Opera House. In this introduction, Libbey became the guide’s uncle from Canada, who was in Boston to buy horses. The trio went to a nearby drinking resort where, it is said, some very bad moonshine was bought.

Some one rapped on the window and the “Alderman” and “actress” went to see what was wanted. They didn’t return and Libbey quickly discovered that some one had got to his back pocket and had stolen $150.

Libbey furnished descriptions to the police, but his descriptions would fit hundreds, and are considered of little or no value.

Libbey showed a policeman the name and address of the guide, which, Libbey said, was given him soon after his arrival at the railroad station. As near as it could be made out it read: “Nicholas H. Fagan, 200 North Broadway, between Shawmut av. and Hanover st.” (Boston Globe, August 5, 1921).

This particular William Libbey left no trace yet found in the Milton record. Perhaps, as they say, the names were changed to protect the innocent. The thieving Alderman-at-Large’s false calling card in the name of “Nicholas H. Fagan,” i.e., Fagin, was a nice touch.

The Baptist. (1921, June 4). Our Own Folks. Retrieved from books.google.com/books?id=QSFRAQAAMAAJ&pg=PA571