The Porter-Milton Ice Company, based now in Reading, MA, had “water ice,” i.e., “natural” cut ice blocks as opposed to ice created through refrigeration, available for sale from its Milton ice houses.

Charles J. Berry of Milton Mills celebrated his ninety-third birthday in Wollaston, MA, as he had in 1927, 1928, and 1929. He is here identified as one of the last three members of Milton’s Eli Wentworth Post of the Grand Army of the Republic (G.A.R.) Civil War veterans’ organization. 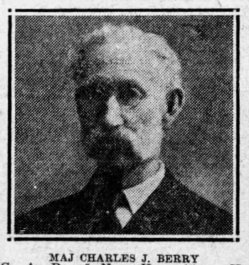 MILTON MILLS VETERAN TURNS 93 IN WOLLASTON. QUINCY, Feb. 14 – Maj. Charles Jewett Berry of Milton Mills, N.H., a veteran of the Civil War, is observing the 93d anniversary of his birth today at the home of his daughter, Mrs. William M. Burrell of 114 Beach st., Wollaston. Maj. Berry is one of the three surviving members of Eli Wentworth Post, G.A.R. of New Hampshire. He served in the 1st New Hampshire Cavalry and is president of the 1st New Hampshire Cavalry Association. He is the oldest resident of Milton Mills. His birthday anniversary was marked today at a dinner in his honor at the home of Mrs. Burrell. Among the guests present were Mr. and Mrs. Herbert Farnsworth at Swampscott, Mr. and Mrs. Albert Farnsworth of Everett, and Mr. and Mrs. Alan Painten of Wollaston. Maj. Berry received many messages and cards of congratulation. Mr. and Mrs. Burrell were assisted in the arrangements of the party by Mr. and Mrs. Clifford A. Berry of East Weymouth. Mr. Berry is physically well and mentally alert and attends each Summer the reunion of veterans at The Weirs, N.H. He has two sons, Arthur L. Berry of Woodfords, Me., and Clifford A. Berry. He is spending the Winter months in Wollaston at the home of his daughter (Boston Globe, February 14, 1930).

A destructive fire occurred in the Milton Mills home of Luther B. and Clara E. (Berry) Roberts, an elderly couple who happened to be sick in bed at the time. Both the Milton and Rochester fire departments responded. The neighboring home of Mary E. Clark was saved.

SICK COUPLE, 85, RESCUED AT FIRE. Blaze in Early Morning Scares Milton Mills, N.H. Special Dispatch to the Globe. MILTON MILLS, N.H., March 21. Fire which destroyed the 2½ story colonial house occupied by Mr. and Mrs. Luther B. .Roberts caused quite a scare in this village early this morning. Help was summoned from Milton and Rochester and before the fire was put out adjacent property was slightly damaged. The structure burned was the home of Mr. and Mrs. Luther Roberts, who recently celebrated their 55th wedding anniversary. Both are about 85 and were confined to bed by sickness. Grange Hall was opened and the couple taken from the burning house to that place on stretchers. The house was filled with antique furniture, all of which is a total loss. The damage is estimated at $5000 (Boston Globe, March 21, 1930).

Luther B. Roberts, retired, aged eighty-four years (b. ME), headed a Milton (“Milton Mills Village”) household at the time of the Fifteenth (1930) Federal Census. His household included his wife, Clara E. Roberts, aged eighty-seven years (b. NH). He owned their house on Main Street, which was valued at $2,000. Their household appeared between those of Fred H. Simes, a woolen mill superintendent, aged some years (b. NH), and Mary Clark, a housewife, aged fifty-nine years (b. NY). They did not have a radio set.

AGED COUPLE LOSE HOME. Milton Mills, March 22. – Starting, it is believed, from an overheated stove, fire early yesterday swept through the fine 2½ story Colonial home of Mr. and Mrs. Luther Roberts here, and destroyed it, together with its contents. The blaze spread to the home of Mrs. Mary Clarke, next door, where, farmed by a high wind, it was making considerable headway when stopped by firemen from Milton and Rochester. Damage to both places is estimated at about $7000 (Portsmouth Herald, March 22, 1930).

BOSTON MARINE STOPPED, CHELSEA BOXER GETS DRAW. DOVER, N.H., April 4 – Tiger Tom Dixon of Dover won on a technical knockout over Sandy Jack Taylor, Boston marine, in the second round of a scheduled 10-rounder here tonight. In the six-round semifinal, Rudy Santerre, Suncook, knocked out Bob Cecchetti of Madbury. In another semifinal, Emile Vachon, Milton, N.H., knocked out Young Delaney of Portsmouth in the second round. Johnny Kelley, Sanford, Me., and Sam Linden, Chelsea, Mass., boxed a  (Boston Globe, April 5, 1930).

Charles E. Woods, a Portsmouth salesman, of 43 Whipple Road in Kittery, ME, had camps to let in the woods on the lake in Milton, NH.

OBITUARY. Mary C. Horne. Mrs. Mary C. Horne, formerly of Portsmouth, widow of the late Frank G. Horne, died early Friday morning at the Wentworth Hospital, in Dover, following a lingering illness, aged 78. For many years she made her home in Milton, N.H., being a member of the Congregational Church of that town and president of Plummer Ridge Sewing Circle. She is survived by two daughters, Mrs. Charles L. Beaton of this city, with whom she resided while in Portsmouth, Mrs. R.W. Cobb of Dover, son Herbert F. Ham of Farmington, a sister, Mrs. Charles C. Smith of Tamworth, a grandchild, Miriam J. Cobb of Dover. Her funeral will be held from the residence of Mrs. R.W. Hobbs, 665 Central avenue, Dover, on Sunday afternoon at 2.30 with interment in Pine Hill Cemetery (Boston Globe, August 9, 1930).

Mary C. Weeks married in Rochester, NH, March 24, 1875, she of Wakefield, NH, and he of Milton. He was a trader, aged twenty-three years (b. Milton); she was aged twenty-two years (b. Great Falls).

Frank G. Horne appeared in the Milton directory of 1917, as a farmer, and manager for the Nat. Biscuit Co. [Nabisco] in Dover, NH, with his house at Plummer’s Ridge, 4th north of schoolhouse. He died in Milton, in November 1923, after which point she resided with various children.

It would seem that school buses were not in use yet, at least not in Milton Mills. Here we learn of seven Nute High school students being injured when the school automobiles – plural – in which they were riding overturned.

Emile Vachon, the Milton boxer of April and of the prior year, fought again at the Dover City Hall, but lost this bout in the fourth round.

BIG BOY RAWSON TAKES EVERY ROUND AT DOVER. DOVER, N.H., Oct 3 – Big Boy Rawson of Boston won a 10-round decision over Dynamite Dan. Martin of this city tonight at the Dover A.C. show in City Hall. Rawson won every round. Bill Burgess of Dover won a six-round verdict over Frankie Woods of Boston. Phil Chester, another local boxer, knocked out Henry Tatro of Concord, N.H., in one round. Harry Burleigh defeated Emil Vachon of Milton, N.H., in four rounds, and Jerry Lamontagne of Rochester, N.H., was given a decision over Young Sullivan of Sanford, Me. (Boston Globe, October 4, 1930).

The Pownals. Former Pastor Ordained. Howard M. Starratt, a former pastor of the Baptist church in this village, was ordained to the ministry at Milton Mills, N.H., on Sept. 24th. The ordination sermon was preached by Rev. Nathan R. Wood, D.D., the welcome to the ministry and charge to the church by Prof.. Edwin H. Byington and the charge to the candidate and ordaining prayer by Rev. Austin T. Kempton. The candidate had studied under the first named two men at Gordon college, Boston, and had worked under Dr. Kempton in Cambridge (Boston Globe, October 8, 1930).

Rev. Howard M. Starratt, of Milton Mills’ Baptist church, resigned his pastorate in order to accept a call to LaFayette, IN. (He had come to Milton Mills in September 1928).

The Pownals. POWNAL. Has New Pastorate. Rev. Howard M. Starratt who has been at Milton Mills, N.H., since leaving here two years ago has resigned there to accept the pastorate of the First Baptist church at LaFayette, Indiana, and will begin his duties at once. The church has a membership of three hundred. Mr. Starratt was accompanied on the trip by his brother, Charles, formerly of North Adams. Mrs. Starratt is staying a few weeks at the home of her parents, Mr. and Mrs. F.E. Bishop of Clarksburg before going to her new home (Boston Globe, October 31, 1930).

DEER CHARGES AUTO, GETS KILLED OUT OF SEASON. MILTON MILLS, N.H., Nov. 13 (A.P.) – Clifford Hersom did not have to wait until the official opening of the deer season to get one. He was returning home In his automobile today when he encountered a deer on the road. Hersom pulled his machine to one side to avoid the animal, but it charged the machine, broke a headlight, ruined a mud guard and a few other accoutrements. The animal then ran into a field and dropped dead. A game warden permitted Hersom to keep the deer as compensation for the damage to his automobile (Boston Globe, November 14, 1930).

Here we learn of Rev. Alfred Goodwin Peacock leaving his parish in Dedham, MA, to accept another in Lisbon, NH.

Alfred G. Peacock was born in Milton, November 4, 1898, son of Rev. Robert M. and Ada M. (Lee) Peacock. His father had been the fourth Nute Chapel pastor in West Milton, between 1896 and 1911. Rev. Peacock the younger would have been about twelve years of age when his father accepted a call to Vassalboro, ME, in 1911.

FORMER DEDHAM PASTOR ACCEPTS LISBON PULPIT. WEST MILTON, N.H., Nov. 24  Resigning from the pastorship of the Riverdale Congregational Church at Dedham, Mass, Rev. Alfred G. Peacock has accepted a call to the Congregational Church at Lisbon, N.H. Rev. Mr. Peacock, who received his early education at Nutes Ridge, West Milton, N.H., was graduated from the Oak Grove Seminary, Vassalboro, Me., and the Theological Seminary at Bangor, Me., class of ’25 (Boston Globe, November 25, 1930).

Alfred G. Peacock, a Congregational clergyman, aged thirty-one years (b. NH), headed a Dedham, MA, household at the time of the Fifteenth (1930) Federal Census. His household included his wife (of three years), Faith K. Peacock, aged twenty-six years (b. ME). They rented their house at 5 Lindale Avenue, for $30 per month. They had a radio set.