Lester Belmont Bradford was born in Castle Hill, ME, September 10, 1884, son of George F. and Melvina A. (Sylvester) Bradford.

Lester B. Bradford was recorded twice in the Twelfth (1900) Federal Census. He appeared also as Lester B. Bradford, a student, aged sixteen years (b. ME), boarding in the Ashburnham, MA, household of James C. Story, a physician, aged forty-five years (b. NY). Bradford was one of eleven student boarders, who were likely attending the Cushing Academy there. (Ashburnham, MA, adjoins his parents’ town of New Ipswich, NH).

Lester B. Bradford was among ninety-one graduates of the Maryland Medical College, who received their degrees at the Lyceum Theatre in Baltimore, MD, on Friday evening, May 5, 1905, followed by a banquet at Heptasoph Hall, at the intersection of Cathedral and Preston streets (Baltimore Sun (Baltimore, MD), May 3, 1905).

BRAND NEW DOCTORS. Maryland Medical College Holds Its Commencement. GIRLS AND FLOWERS GALORE. Lyceum Theatre Crowded With Enthusiastic Friends. Banquet Follows The Exercises. Spritely music, pretty flowers and the presence of their “best girls’ made the seventh annual commencement of the Maryland Medical College last night at the Lyceum Theatre a joyous occasion for the 91 graduates. The theatre was crowded. Nearly all of the students are from out of town, and most of those in the audience came from far away. They were there from Canada, from Cuba and from almost every one of the Eastern and Southern States. For the parents and other well wishers of the graduates the distance made the occasion more momentous (Baltimore Sun (Baltimore, MD), May 6, 1905).

Mitchell-Cony’s Town Register of 1907-08 tells us that “Dr. L.B. Bradford came here [to Milton Mills] about the month of June, 1907, but remained only a short time.” Possibly, there was insufficient scope in the village of Milton Mills for a budding eye, ears, nose and throat specialist. He was in Rockland, ME, by 1910.

Lester B. Bradford was resident in Rockland, ME, when his father died in neighboring Thomaston, ME, February 27, 1911, aged sixty-one years. (His mother, Melvina A. (Sylvester) Bradford, died in Thomaston, ME, June 6, 1915).

Lester B. Bradford appeared in the Rockland, ME, directory of 1917, as a physician, resident at 335 Main street.

Talk of the Town. Dr. L.B. Bradford recently passed a successful examination at Fort Preble, and becomes a member of the medical reserves, in the department devoted to eye, ears and nose, which has been his specialty while practicing here. His friends will be especially pleased to learn that he has been recommended for a captaincy. Dr. Bradford is a graduate of the Maryland Medical College (Rockland Courier-Gazette (Rockland, ME), December 7, 1917). 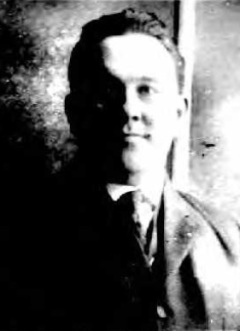 The American Red Cross, National Headquarters, Washington, D.C.
January 28, 1920.
Mr. G.L. Brist, Division of Passport Control, State Department, Washington, D.C.
Dear Mr. Brist, This will serve to introduce Dr. Lester B. Bradford. Dr. Bradford is going to France for the American Red Cross, and we would thank you to accept his application for passport. The application is complete with the exception of his birth evidence, but as he has his discharge from the Army, I think this will be wa[i]ved. May I have the passport Saturday?
Yours very truly,
S. Ethel Sparks, Passport Clerk, Department of Personnel.

Lester B. Bradford does not appear in the Fourteenth (1920) Federal Census, as he was working overseas for the American Red Cross (and the American Relief Administration). He set up hospitals in forty different countries.

Practicing Surgery Among Bandits. The familiar story of the dying Indian who reveals to the comforter of his last moments the secret of a hidden hoard of gold, is credible, if familiar. A man might, once in a lifetime, be the recipient of such a secret. But if you were told of a man to whom half a dozen dying Indians had at different times revealed the secrets of half a dozen separate and distinct treasures, you might perhaps appear to believe the story for the sake of politeness, but you wouldn’t be likely to rush down to the station and buy a ticket for the town nearest the spot indicated on one of the old Indian’s maps. Nevertheless there is in Turkey an American surgeon who has this experience. Dr. L.B. Bradford, of Boston, in charge of the American Red Cross hospital of 150 beds at Prizren, has been the custodian of valuable secrets. Coming into such intimate contact with Turks, Serbs and Albanians, and saving, as he does, the lives of their mothers, fathers, sisters and brothers, it is only natural that he should win the confidence of thousands, some few of whom endeavor to repay his kindness by telling him hidden treasure stories, most of which are true. But the treasures are not available to Dr. Bradford because the hidden hoards are in the form of lodes of valuable metals, like gold, silver and copper, and Dr. Bradford is not a mining engineer. Prizren is located in wild country. And a native possessed of the secret of a gold mine is not a good insurance risk. It is the Balkan custom to do away with plain citizens who know too much about valuable mines. About one quarter of the cases in the hospital are gunshot wounds, many of whom are Turkish and Serbian travelers shot up by bandits that infest the mountains. An odd feature of these wounds is that 87 per cent of them are below the knee. The bandits shoot low, for they are averse to taking human life, and want pocketbooks and jewelry only – American Red Cross (Phillips, 1921).

Lester Belmont Bradford married in Boothbay Harbor, ME, December 10, 1921, Elizabeth Bonaventura McDonald, he of Pocono Pines, PA, and she of Stroudsburg, PA. He was a physician, aged thirty-five years, and she was a nurse, aged twenty-seven years. She was born in Ashley, PA, July 31, 1894, daughter of Thomas F. and Elizabeth L. (Smith) McDonald.

Lester B. (Elizabeth) appeared in the Rockland, ME, directory of 1942, as a physician, with both his house and office at 50 Masonic street.

Dr. L.B. Bradford, Prominent Maine Specialist, Dies. ROCKLAND, Sept 24 – Dr. Lester B. Bradford, 63, died at his summer home at Tenant Harbor, Sept. 24, He was born in Castle Hill, son of the Rev. George Frederick and Melvina Sylvester Bradford. His wife was the former Elizabeth McDonald. A graduate of the University Maryland in 1906 [1905] as an eye, ear, nose and throat specialist, he began his practice in Rockland. In World War 1 he went overseas as a major, and was in the zone of advance, going to Coblenz with the Army of Occupation and remaining there for a year after the war ended. Returning to this country, he was again sent to Europe with the Red Cross and the Hoover Relief Administration. During 1920 he visited 40 countries and had official status with the Polish Commission, working out of Paris, and setting up hospitals in each country visited. He was in Russia during the typhus epidemic in 1920 and returned to the United States in 1921, joining the U.S. Public Health Administration, which later became the Veterans Administration. Since then he had practiced his specialties in veterans’ hospitals all over the country, also examining pilots of World War II. At the time of his retirement to private practice in 1941, he was the head of the eye, ear, nose and throat diagnostic center of the Veterans Administration in San Francisco. Besides his wife, he is survived by two brothers, Gene of Spencer, Mass., and Capt. Walter, a chaplain in the Pacific area. Funeral services will be held at his Tenant Harbor home Wednesday afternoon at 1.30, the Rev. Maldwyn Parry officiating. Interment will be in Arlington National cemetery Thursday afternoon at 3 o’clock with full military services (Bangor Daily News, September 24, 1945).

OBITUARIES. MRS. ELIZABETH BRADFORD. TENANT’S HARBOR, May 19 – Mrs. Elizabeth Bradford, 58, widow of Dr. Lester B. Bradford, formerly of Rockland, died Tuesday afternoon at her home here. She was the daughter of Thomas and Elizabeth Smith McDonald. She is survived by a brother, Thomas McDonald of Passaic, N.J. The Rev. Charles F. Bennett will officiate at a Requiem Mass., Thursday morning at 9:00 o’clock at St Bernard’s Catholic church, Rockland. Rosary will be recited Wednesday evening at 7:30 o’clock at the residence here. Burial will be at Arlington National Cemetery at Fort Meyers, Va. (Bangor Daily News, May 20, 1953).