In this year, we encounter a bank embezzler, an escape artist, and a table girl wanted at the Milton Hotel.

Albert O. Mathes, of Dover, NH, featured in Milton’s Centennial, August 30, 1902, in presenting a memorial clock (for the steeple of the Congregational church), as well as arranging for a display of historical artifacts. 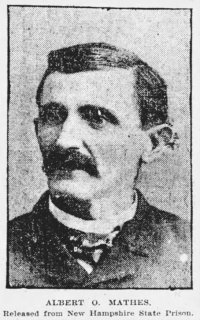 CASHIER MATHES INJURED. Dover Banker Fell Between the Cars at Milton. Albert O. Mathes, cashier of the Strafford Savings bank of Dover and will known in this city, fell between the cars at Milton, while getting off the train, at noon on Thursday. One of his legs was so badly crushed it is believed it will be necessary to amputate the member below the knee. Mr. Mathes has been ill for the last week and is subject to dizzy spells. It is thought that he had one of these spells and lost his balance while alighting from the moving train (Portsmouth Herald, May 1, 1903).

ADMITS WRONG-DOING. Treasurer of Strafford Savings Bank a Defaulter. FIRST TOOK CASH IN 1890. Became Involved In Speculation and Had Never Been Successful – Used Money of Personal Friends and Covered Up Shortage For Years. Dover, N.H., June 1. The bank commissioners of New Hampshire announced that Albert O. Mathes, for 35 years treasurer of the Strafford Five Cents Savings bank of this city, is a defaulter to the amount of $15,452.43. The officials of the bank have placed the facts in the hands of Attorney General Eastman. Mathes has an accident insurance policy for $7500 which he has turned over to the bank, and has real estate valued at $8000 in this city, which will also be placed at the bank’s disposal. In addition he was under $50,000 bonds furnished by a Baltimore guaranty company. Mathes, who had been in ill health, went to Milton, N.H., on April 29, where his mother resided, and met with an accident, having his leg cut off by falling under a train. President Brown of the bank first had his attention called to the irregularities when complaints began to come in from depositors that they had more money on deposit in the bank than their passbooks gave them credit for. Mr. Brown went to Milton and asked the treasurer about these discrepancies, and the latter admitted to him that he had taken in all $15,400, which was just the amount that was revealed by a more thorough examination of the depositors’ passbooks. Mathes said he first began to take the money in 1890. About that time a friend gave him $1000 with which to speculate, the profits to be shared jointly. He speculated with it and lost, and in order to make good his losses he took money from the deposits of personal friends who had deposited money in the bank and had left their passbooks with him for safe keeping. For two years, he said, he had continued to speculate, and he had never been successful in his ventures. For the past eight years, however, he said be had not speculated at all, but had simply tried to keep his shortage covered up. Notices were sent out to depositors on April 1 to bring in their books for verification and the officials made their examination on April 28, the day before Mathes started for Milton. The Strafford Savings bank is the fifth in Dover in which a defalcation has occurred within a dozen years, the Dover National and the Dover Five Cents Savings bank having failed about 11 years ago through the peculations of Isaac Abbott, the cashier and treasurer. Abbott burned his books and committed suicide on his wife’s grave. By the defalcation of Harry Hough of the Cocheco National and Cocheco Savings banks, who is now in prison, those institutions were wrecked four years ago (North Adams Transcript, June 1, 1903).

OPEN AS USUAL. The Strafford Savings bank of Dover opened its doors as usual on Monday morning at nine o’clock, for all the world as if its treasurer, Albert O. Mathes, were not charged with defalcation of the institution’s funds to the amount of over $15,000. Every official was at his post, and business was transacted without the slightest hitch. There has been no run on the bank by the depositors, nor any indication that they or the public in general have lost confidence in the least in the institution (Portsmouth Herald, June 2, 1903).

HELD IN $6000 BAIL. – Albert O. Mathes Charged with Embezzling $10,000 from Savings Bank at Dover, N.H. DOVER, N.H., July 20. – Albert O. Mathes, ex-treasurer of the Stafford savings bank, came down from Milton this morning and was placed under arrest at the police station on the charge of embezzlement of $10,000 of the funds of the bank. Immediately after voluntarily giving himself up he was arraigned before Judge Frost in the police court. Last Wednesday the alleged defaulting treasurer wrote to County Solicitor Scott that he was ready to be arrested, and asked when it would be convenient to have the arraignment. He desired to come to Dover and have the papers served on him here. Col. Scott designated Monday morning at 9 as the most convenient time, and requested him to come then. Mr. Mathes accordingly came from Milton today on the first train. He was met by his counsel, Hon. John Kivel, and they proceeded to the police station, where Sheriff George W. Parker served the warrant. The ex-treasurer appeared much emaciated, but his strength has been steadily increasing since the accident at Milton last spring, which cost him his leg. He now gets about readily on crutches. At the arraignment counsel Kivel waived the reading of the warrant, but did not enter a plea in the case, as his client desired to do that. Mr. Mathes, upon the advice of his counsel, decided to plead not guilty, in order that the respondent might derive the advantage of such a plea in case any defect should be found in the expected indictment. The court held Mathes for appearance before the September term of the superior court, and fixed his bail at $6000, which was immediately furnished. The bondsmen are John T.W. Ham of this city and Amos M. Roberts of Milton. Solicitor Scott stated after the arraignment that he believed it to be Mathes’ intention to plead guilty before the superior court, when the case comes up for final disposal. He based his opinion on Mathes’ declaration before the police court that he desired to plead guilty. Mr. Mathes returned on the 10:40 train to Milton, where he is staying at his mother’s home. Mathes’ expressed intention to plead guilty is not surprising, in view of the fact that he made a clean breast of his wrong-doings before Pres. Brown and other officers of the bank. Although Mathes had never been placed under arrest formally, it has been known for some time that a warrant for his detention on the charge or embezzlement was in the possession or the county solicitor. The paper was issued by the court shortly after the examination of the books of the Strafford bank disclosed a large defalcation. Suspicion was at once attached to Mathes, and soon afterward the severance of the relations of Mathes as treasurer of the bank was announced. The reason the government did not arrest the bank treasurer was that he met with an accident at Milton. as a result of which he had been confined indoors until today, when the doctor permitted him to come to Dover for the court proceedings (Boston Globe, July 20, 1903).

Mathes’ Shortage Made Good. DOVER. N.H., Aug. 4 – The Strafford savings bank of this city has received payment in full from the fidelity concern which furnished bonds for Albert O. Mathes, the former cashier, now under arrest. The shortage was about $12,000 (Boston Globe, August 4, 1903).

GOES TO PRISON. Albert O. Mathes Pleads Guilty in Dover. Embezzled $10,000 From the Strafford Savings Bank. Sentenced to Two or Three Years at Hard Labor and Costs. DOVER, N.H., Oct. 22. – The arraignment of Albert O. Mathes. ex-treasurer of the Strafford savings bank of this city, indicted at the September term of the superior court for the alleged embezzlement of $10,000 of the bank’s funds, May 1, 1903, took place at 9:30 this morning in the superior court. The ex-official came down from his mother’s home at Milton on the 8:30 train, and walked on crutches to the courthouse. where he was met by hits counsel, Hon. J.S.H. Frink of Portsmouth, and Hon. John Kivel of this city. Half an hour later he walked into the courtroom, appearing remarkably cool and well prepared for the ordeal, although somewhat pale and emaciated. Before the arraignment a 20-minute conference was held in the judge’s private room between Judge Stone, Atty. Gen. Eastman, County Solicitor Scott and Mathes’ counsel. Attorney Frink waived the reading of the indictment. Mathes’ plea was then called for by the clerk. Rising from his seat, Mathes replied. “I am guilty.” Mr. Frink then addressed the court at length in an argument for a mild sentence on the ground of extenuating circumstances. Atty. Gen. Eastman said that while his sympathies were touched by the appeal of the respondent’s counsel, he, as a representative of the people, must do his duty toward securing the ends of justice, and should ask for a reasonably long sentence. Judge Stone then sentenced Mathes to not more than three years nor less than two at hard labor in the state prison and to pay the costs of prosecution. Mathes received the sentence with emotion. The maximum penalty in this state for a crime of this nature is five years. A mittimus was immediately prepared and the ex-treasurer was taken to Concord by Sheriff Parker on the 19:40 train. This was done in order that Mathes might begin serving his sentence today. No member of Mathes family was present at the arraignment. The farewells were said at his mother’s home at Milton this morning (Boston Globe, October 23, 1903).

Mrs. Albert O. Mathes had her house at 58 Silver Street in the Dover directory of 1905. Lura Mathes, an employee at C.M. Co. [Cocheco Manufacturing Company], boarded there with her.

John Ray Goes to Jail. SANFORD, Me., July 28 – John Ray, known as “Sailor Jack,” who escaped from officer Tibbetts last Thursday after having been sentenced in the municipal court to pay $3 and costs or serve 30 days in jail for intoxication, was recaptured by Tibbetts at Milton Mills last night. Ray was committed to jail this morning to serve the sentence for intoxication (Boston Globe, July 29, 1903).

One might not be too terribly surprised to find that Cassie divorced Sailor Jack. She married (2nd) in Boston, MA, July 21, 1906, Hubert E. Reish, she a mill operative, of Portsmouth, NH, aged twenty-four years, and he a blacksmith, of Indianapolis, IN, aged twenty-two years.

Cassie B. Reish died in Wolfeboro, NH, September 16, 1915, aged thirty-three years. She had resided there for one year, having previously resided in Boston.

Whoever this table girl might have been, she would have served, among many others, May Bogan and her daughter Louise, the future poet laureate.