The Portsmouth Herald of April 26, 1963 had an advertisement for Ray’s Sunoco & Sport Shop, which was situated on NH Route 16 [899 Central Avenue] in Dover, NH, “Next to DAN’S Super Market.” The advertisement also mentioned the Grand Opening May 1 of Ray’s Marina, Rte. 16, Milton Three Ponds, Milton, N.H.

Ray’s Sunoco Service Station appeared in an April 1956 advertisement of Leading Merchants that gave Top Value Stamps as a part of their transactions. A sufficient number of stamps might be redeemed for various consumer products.

Ray’s Sunoco put on a three-day boat show at the Dover Armory, March 31-April 2, 1961. It advertised boats at the service station in April 1962.

The following advertisement for an All Family Boat Show appeared in the Portsmouth Herald of May 5, 1963. Apparently, this represented an extended part of the previously advertised Grand Opening of May 1, 1963. 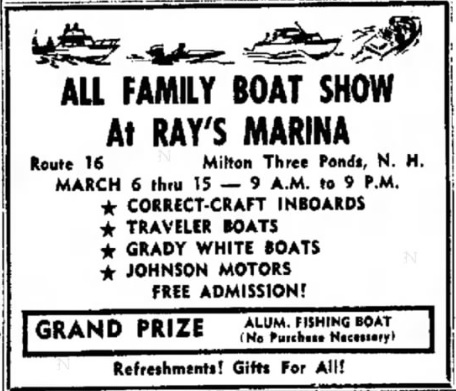 Top Value Stamps included Ray’s Sunoco, Central Avenue, Dover, N.H, among their Leading Merchants in an advertisement of June 10, 1964, but apparently not thereafter.