In this year, we encounter a boiler explosion, a new hardware store, a bumper ice crop (except at Milton), a grisly drunk-driving death, a two-headed snake, and a stamp collector.

Water for water-powered mills would have been more plentiful in certain seasons than in others, and even in season the activities of other upstream mills may have interrupted supplies temporarily. The various water-powered mills along Milton’s Salmon Falls River usually had also backup steam-powered engines.

NEWS OF THE DAY. The boiler in Carricade’s pulp mill at Milton, N.H., exploded, wrecking a portion of the mill. The amount of damage is not known (Plain Speaker (Hazelton, PA), February 3, 1891).

Perhaps, but we have not yet found any sign that he actually did so. Harry L. Burbank of Parsonfield, ME, came here a decade later.

According to this account, this was generally a good ice year. However, the Union Ice Company did not find it profitable to continue cutting in Milton, where the ice happened to have a large snow content.

ICE A-PLENTY THIS YEAR. Hundred of Thousands of Tons Left Over – A New Ice Plane. BOSTON, March 12. – For once the Icemen themselves admit that the crop has been a good one. They are ready to go on record in the matter, and so cannot consistently raise the price next summer. The Boston and South Boston ice companies think the prices will be the same as in 1888. This does not mean that the market is overstocked, but only that the “war rates of 1889 and 1890 will not rule this season.” Of last year’s crop there are some 200,000 tons remaining in New Hampshire and Maine. This will never see the market. This circumstance shows that the scarcity of last season did not really justify the exorbitant prices that speculators tried to require the public to pay. The consumption diminished about one-half last season owing to the high prices The Penobscot and Kennebec supplies are good, much better than the New York supply The fish trade Is amply provided for. The Union Company, which does wholesale business with the fishermen, report all their houses filled to repletion. Their ice is cut almost wholly at Wilmington. They started to cut at Milton, N.H., but the quality was so affected by the quantity of snow ice that the attempt was abandoned as unprofitable. The inland cuttings In Maine, so much used last year, were also abandoned. Inland ice is of poor quality this year. Many firms planed both sides of each cake in order to get ice of first quality. They used a new appliance for this purpose invented in New York last year. Instead of doing the planing on the ice field each block as it is hauled to the storehouse passes under a machine that does the work ((NY) Sun, March 13, 1891).

The unfortunate Frank Leighton died a horrible death while driving his wagon under the influence. (You might want to skip over this one).

HIS LUNGS PROTRUDED. Frank Leighton, Caught in the Gear of His Wagon, is Dragged Six Miles, and His Body is Horribly Mutilated. DOVER, N.H., March 31. Frank Leighton of Milton drove to Rochester yesterday in a skeleton wagon. He got intoxicated, and at one of the saloons he was placed in his wagon, and started for home. About two miles out of the village he fell out. and his legs getting caught in the gearing and was dragged, face down, to the outskirts of Milton. a distance of six miles. where he was found dead. The flesh was all stripped from his face and hands, his clothes torn off, and the flesh torn off his chest. so that the lungs protruded. He was about 35 years old (Boston Globe, March 31, 1891).

TELEGRAPHIC BREVITIES. Frank Leighton of Milton, N.H., while drunk, fell from his carriage yesterday and was dragged six miles over a rocky road. He is dead (NY Times, April 1, 1891).

The Milton boy that killed a two-headed snake is not here identified. The intrepid aeronautical Professor George A. Rogers, who came into possession of the snake, was somewhat easier.

SNAKE WITH TWO HEADS. Not an Imaginary One But a Real Adder from New Hampshire. Prof. G.A. Rogers, the great American aeronaut, dropped into THE GLOBE office yesterday afternoon having in his possession a very rare species of a brown adder. It was 11½ inches long, and with two distinct heads, 1¼ inches from the point of contact [and] had the appearance of two snakes artistically rolled into one. This peculiar freak of nature was killed a few days ago by a 7-year-old Milton, N.H., boy, who performed the feat with a short stick as the youthful adder was coming out of a small pile of rocks (Boston Globe, April 10, 1891).

Prior to the Wright Brothers, Professor Rogers’ aeronautic feats would have taken place in a balloon. (I see, the Professor “dropped” into the Boston Globe offices).

George A. Rogers was born in Wolfeboro, NH, in 1830, son of Henry and Nancy (Richardson) Rogers. (His father was born in Alton and his mother in Farmington). He occasionally used the name Augustus, which may have been his middle name. 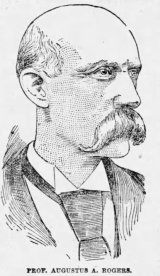 Dangers of Ballooning. The Independence Day celebration at Boston closed with a tragedy in the upper air. Prof. G.A. Rogers, the well-known aeronaut, who had made one hundred and eighteen balloon ascensions, together with Thomas Fenton and De Los Goldsmith, a reporter, made a balloon ascension from Boston Common as the final feature of the observance of the day. The balloon, when released, shot up perpendicularly, and after reaching the height of about a mile was blown seaward at a rapid rate; then it began to descend. It was supposed by observers that Prof. Rogers had opened the safety valve with the intention of descending before the balloon was out at sea. While the crowd watched, the balloon suddenly collapsed and fell into the bay; the car sank and the folds of the balloon settled over the occupants. Two of these were seen to emerge from beneath the balloon, one being Prof. Rogers, the other Reporter Goldsmith. Fenton did not come to the surface. Goldsmith swam easily and was rescued, but Prof. Rogers seemed to have sustained some injury, and just before assistance reached him he threw up his hands and sank. The body of Prof. Rogers has not been recovered; Fenton’s body was brought into view as the rigging of the balloon was drawn up by the rescuing party. Fenton’s neck had been caught in one of the meshes of the net. His body was warm when taken from the water, but all efforts to resuscitate him failed (Scientific American, July 16, 1892).

Boston’s vital records include the accidental drowning in Dorchester bay, on July 4, 1892, of George A. Rogers, of Malden, MA, aeronaut, aged sixty-one years and eleven months.

We shall encounter the Professor’s two-headed snake again in the future.

We encounter him here at the age of seven years, trying to exchange his foreign stamps for US stamps.