In this year, we encounter accounts of a growing boy, a new postal route, a major mill fire, a comic story, a report on the Milton Mills Congregational church, and the destruction by fire of the Nathan Jewett house at Milton Mills. (At the national level, this year closed with the financial Panic of 1873).

It is difficult to say why this merited press attention. It seems as if this sort of information must have originated with the Brown family itself. The boy, presumably Everett E. Brown, may have been large for his age, but, as his height is not mentioned, it is difficult to say. (The average person was smaller then).

Everett E. Brown lived still with his parents at the time of the Twelfth (1900) Federal Census. He was then an ice handler, aged forty-five years, for which job some measure of size and strength would have been helpful. He died in Milton, July 9, 1921, aged sixty-seven years and twenty-two days.

New Hampshire. A new postal route has been established in this State, between Milton Mills and Haines Mills [Horne’s Mills in Wakefield]. It was ordered last week (Boston Globe, January 17, 1873).

Edward Brierley was born in Rochdale, Lancashire, England, May 19, 1817, son of John and Mary Brierley.

He married Margaret M. Thompson. She was born in Paisley, Renfrewshire, Scotland, in 1812. She died in Milton, July 30, 1888, aged seventy-five years.

There was a sort of comic relation of an event that supposedly took place in Milton.

A THOUGHTFUL MAN. A blood relation of the immortal Mrs. Toody dwells in Milton, N.H., He is a much marred man, having recently brought home his fourth wife. This estimable lady, two or three days after installation in her new home, was regulating the furniture according to her ideas of taste and propriety. Accompanied by a boy of seven years, she went into an attic chamber, where she found a pair of newly-made saw-horses, such as carpenters use in cutting lumber. She said: “Sammy, my son, what are these horses for?” “Well, father keeps them horses to put his wives’ coffins on.” Imagine that pair of horses taking a Sam Patch leap from the attic window of the two-story house with: “I guess my coffin won’t ride them this week” (Danbury Reporter (Danbury, NC), August 28, 1873).

Mrs. Toody was a fictional character in To Oblige Benson, an 1854 one-act comedietta by Tom Taylor. (Abraham Lincoln was assassinated at another of Taylor’s plays: Our American Cousin). A Sam Patch leap is a headlong jump from a cliff. (Note the play on words: the husband is much marred, because his wives keep dying, but, on account of that, he is also much married). 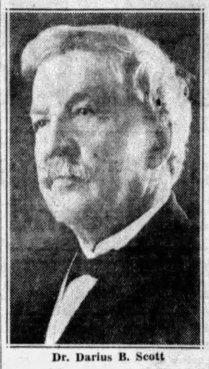 following mention of the Milton Mills Congregational church has been extracted from a larger report on the Strafford Congregational Conference. Despite its name, the conference included also Belknap and Carroll counties, as well as Strafford county.

CONFERENCES. The youngest of our New Hampshire churches, at Milton Mills, has been richly blessed during the year. Its pastor, D.B. Scott, was installed Sept. 1, 1872. He writes: “Some discouragements, but no defeats, for the Lord is on our side. We gratefully acknowledge the good things of the past, and hope for still greater things in the future.” Twenty-three have united with the church on profession, and fifteen have been baptized, – seven infants, – a cheering statement in the too wide-spread neglect of this ordinance, The Sabbath Hymn and Tune Book has been introduced, and a friend has given a rich communion service (Vermont Chronicle (Bellows Falls, VT), September 20, 1873).

This would be the union evangelical Congregational church organized at Milton Mills in September 1871.

One of Milton Mills’ early homesteads was destroyed by fire in October.

New Hampshire. The house known as the Nathan Jewett House at Milton Mills was destroyed by fire on the 11th inst. Loss not reported. Insured (Boston Globe, October 23, 1873).

Nathaniel Jewett’s saw-mill, owned by himself and others, was one of twelve mills in Milton in 1813 (Scales, 1914).