New Hampshire’s legislature or General Court is a bicameral one. It has lower and upper houses, known respectively as the House of Representatives and the Senate. All of its officers, including its Governor and his Executive Council, are elected for two-year periods known as “biennia.”

Concord has been said to have become the de facto capitol in 1808 and the de jure one in 1816. The current capitol building in Concord, NH, opened its doors in 1819. Milton Rep. Theodore C. Lyman would been the first Milton representative to have had a seat there. 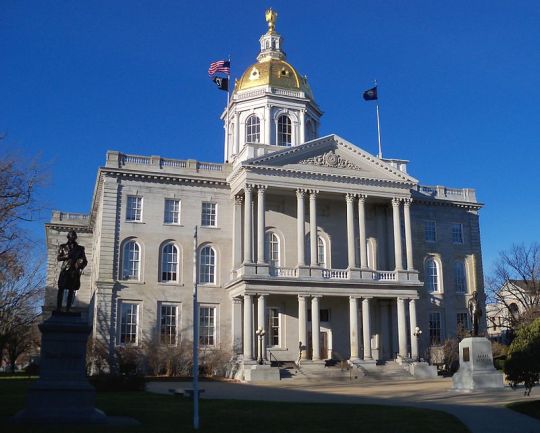 The building described in 1833 did not yet have a dome or portico, as it does now.

By 1865, its dome had been added and a cupola was being placed atop it, with an eagle atop the cupola. Its granite portico was under construction.

The designs of Mr. Architect Bryant begin to assume form and shape in the progress of the work on the New Hampshire State House. The cupola is framed, and the old eagle, after a long season of rest and refreshment, again faces the rising sun, and this time from a higher perch than before. Along the front of the reconstructed edifice are to be reared twelve massive granite columns hewn from the same quarry whence were taken the immense masses of the Concord City Hall (New England Farmer (Boston, MA), September 23, 1865).

Prior to the advent of trains and automobiles, most state representatives and senators would have simply resided in the capitol city for the duration of the legislative session, rather than travel back and forth. Some sources – directories, manuals, and registers – identified the various boarding houses and hotels in which the members were residing. (For example, Milton Rep. Charles W. Gross occupied seat 03-27 in the House chambers and boarded at 45 Park street during the 1887-88 biennium).

Prior to being set off as its own town, Milton – then called the Northeast Parish of Rochester – had been represented by men sent from its parent town. Milton came into its own in 1802, which was too late to send its own representative to the 1801-02 biennium.

In some periods Milton had two representatives, usually when it constituted a larger proportion of the state’s total population than it does at present.

John Scales provided in his 1914 History of Strafford County the names of the person or, for a period beginning in 1853, the two persons, representing Milton in the NH House of Representatives (Scales, 1914). Scales drew heavily upon an earlier work by Charles C. Hayes of Milton, whose list ended with the 1881-82 biennium. Consequently, Scales’ list ran only from the 1803-04 biennium up through that of 1881-82. (Where external sources provided party affiliations they have been included ([d]=democrat, [f]=federalist], [nr]=national republican, [r]=republican, or [w]=whig)).

There were originally fewer NH representatives overall and their number increased gradually until it was capped at the current total of four hundred. (See The Mathematical Limits of Representation).

New Hampshire has the 3rd largest legislature in the English-speaking world, just behind the British Parliament and the United States Congress. While the State Senate has fairly consistently set itself at 24 members since the late 1870s, the size of the House of Representatives has varied. In 1819 when Representatives’ Hall opened, there were 192 members. By the time the Civil War rolled around, the House had 331 members and by 1900 there were 360 members. Although we have kept the number to around 400 consistently since the latter half of the 1940s, there have been times when the legislature eclipsed that number, such as 1929 when there were 421 members and 1944 when there were 443 members (House Republican Office, 2022).

Next came a twenty-five-year period in which Milton had two NH Representatives.

At which time Milton’s representation dropped back down to a single NH representative per biennium.

Here is compiled a twenty-year list that extends the Hayes-Scales list from the 1883-84 biennium through that of 1901-02. (Where sources provided party affiliations they have been included (d=democrat, p=prohibition, or r=republican)).

Senate districts encompassed multiple towns. That being the case, Milton did not have a Milton-resident senator in every year. Here follows those listed by Scales from the 1803-04 biennium up through that of 1887-88 (Scales, 1914)

NH Sen. Beard Plumer, Esq., of Milton died near the end of the first year of his fifth NH Senate biennium. The mechanism then in place required the NH House to choose his replacement from the two runners-up (if that many there were) of the election that put him in office. That is to say, the Federalist loser of the election would now replace the deceased Democrat winner.

NEW HAMPSHIRE. In the Senate of this State there are two vacancies, one occasioned by the acceptance of a judiciary appointment by the Hon. B. Badger, and the other by the decease of the Hon. Beard Plumer. These vacancies are likely to occasion some embarrassment in the government of that state. They are required by the constitution to be filled by election by the other House, from the two remaining highest candidates in their several districts. In each of the present cases it is said that the highest remaining candidates are federalists, so that the other House, though democratic, will be under the necessity of supplying the vacancies with federalists, an event which would destroy the predominance of the democratic party in the Senate, and give the federalists a check upon the proceedings. Another report is, that there are no two highest candidates in either district, all the votes in each being given to one man, except that two other persons in each district had each one vote (Burlington Gazette (Burlington, VT), December 5, 1816).

(Mr. Plissken observes that this same notion is sometimes put forward when replacing local officials. It sounds reasonable on its face, but one might argue instead that this method has a conceptual flaw, even apart from the complication of opposing political parties. In choosing or promoting the candidate with the next biggest total, one is preferring what was specifically not preferred by the majority of voters when an alternative was present).

Before the fall session, District No. 5 was vacated by the decease of Beard Plumer, and No. 6 by the appointment of William Badger judge in the court of common pleas. These two vacancies were not filled. Jonathan Harvey was chosen president in place of William Badger (NH General Court Manual, 1891).

SeacoastNH. (1998). All about the Old NH Statehouse [in Portsmouth]. Retrieved from www.seacoastnh.com/all-about-the-old-nh-statehouse/?showall=1